Worked some ot today doing some welds in some very very very very hot steam vaults. I'm talking well over 120 degrees, full humidity. Thankfully you are only in there for a short time, but holy crap I'm not used to that anymore

Long walk with the ladies and Jack the Dog to the Olympia Farmers' Market.

Sitting here waiting on coffee...to the hum of the generator outside. Been without power for 12 hours now. I told my wife about 8 years ago when the last band of misfits “trimmed” the lines that we’d be in for a fitful future of electricity. Back when I worked with Asplundh (28-35 years ago), we got 15’ clearance everywhere but in yards, and then hit what we could. Now the little dumplings get what they can with the Jarraff and move along. There’s overhang everywhere, and you can’t go over a half mile and not see limbs nearly brushing the primary. The rain had stopped and the sun was trying to peek out when we lost power.

Self-employment has flat out ruined me. If I do shoddy work, I don’t get paid. Why can’t everyone’s pay work that way?

Went into work and transferred the engineer's hd to an ssd, and installed bunsenlabs in a vm. Works surprisingly well for a 15yr old machine. Now I'm wondering what's wrong with the boss' box. The engineer's is specced slightly better, but not amazingly so.

Also got a new cellphone/plan from walmart to trial as my home internet connection. 3x the data allowance for the same price as boost. Amazing the quality of a phone(Moto E) you can get for $60. I mean, it's a crappy phone relative to the competition, but it does everything you expect a phone to do, and *costs 3x less than a Walkman did in 1979, and all that did was play awful cassettes, and drain batteries. 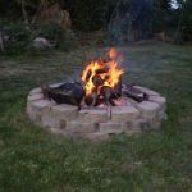 well, the Walkman price wasn't subsidized by a "plan" that creates a constant sucking sound in the wallet area...

Paddled out to a little island with some folks and camped out last night. Easy morning, coffee pancakes& bacon. Followed by beer, bullshiting, swimming, and sailing. Summer in Maine ladies and gents

I had a bad one tuesday, I mean I lost a poplar and stripped all the side of a nice horse chestnut.
It was pretty big, for me, around 32" and, overall, a hard sideleaner, like the stump was almost at the drip line of the crown (not a lombardi poplar but a full spread one). Where it was, the best way was to fell it. I knew it would be very heavy, and I can't see how the hinge could hold that during the fall. So, I put nearly halfway up a 5/8 guy line with a redirect on a stump and a comealong + 2:1 MA on an other stump. I preloaded the bullrope at about 3500 lbs, maxing out the comealong. Not enough to compensate the unbalance, but I trusted the rope to catch the weight (16000lbs breaking strength). HO said that the tree started to lift back. Good.
90° to the guy line and toward the intended lay, I put an other bull rope and the Maasdam on a 2/1 MA, as there was some back lean too and a serious back weight from a major limb. I loaded it and went cutting.
Nice notch, deep to get a full wide hinge. I started the backcut, set a bunch of wedges to help the Maasdam. I keep cutting, slowly to keep an eye to an eventual pinching. OK so far. I left a fat hinge, 8" on the high side and 4" on the low side. Murphy would be proud of me ! But it's really really hard to bend such an hinge. I putt all my energy to bang on the wedges. Tough in the heat.
A vertical split appeared in the stump behind the hinge. A lot of tension there. Eventually, the back weight/lean has been taken care off and the tree started to move seriously. Nice.
The trajectory started as intended, but then, I heard the hinge breaking and saw in disbelief the tree changing its path and go sprawling on the horse chestnut, all the way from the top to the ground. What a mess !
It seemed that my bullrope wasn't even there. It didn't broke but was stretched like a rubber band. I can't believe it. Same with the sling of the redirect, made with 1" tenex tec. I 'd like to know the final tensile, it was like a violin chord.

I made two mistakes (at least). One, I grossly underestimated the load and the stretch of the bull rope. I was way too light on my rigging. Two, I didn't took in account a clue given by the trunk : the wedge on the low side became crushed harder and harder to the point it wouldn't move at all while the one on the high side started to go in more easily (5 wedges total). Afterward, it was clear that my bull rope didn't do its job and the tree was held mainly by the hinge. When this one started to let go, the rope just followed the move under the increasing load.
Rooky time.

Bummer. Was the HO pissed about the chestnut? Knowing what happened, what would you do differently?

Tough one, Marc-Antoine. The first thing that caught my attention was " So, I put nearly halfway up a 5/8 guy line "

I always aim for at least 75% height for a pull line...the higher the better (just don't go small enough to break out the top). You know the math better than I do...but more higher, more leverage.

Gary, I believe he set the guy line to control direction, not to pull (as he described the MA & Masdaam later). If I'm incorrect, no problem correcting my thinking.

I too was concerned about the half way up part. Sometimes I hear guys think there's no way they could pull a tall tree over, so they chunk it down. I'm like, there's no way the tree could not pull over with a rope way in the top, 90% up there.

BeerGeek said:
Gary, I believe he set the guy line to control direction, not to pull (as he described the MA & Masdaam later). If I'm incorrect, no problem correcting my thinking.
Click to expand...

Given the mass of the tree, I was worried to put the anchor point higher. It was topped many years ago and the diameters in the upper part of the crown looked a tad weak vs the main trunk (long skinny regrowths). I didn't want to pull much above this point. Maybe I chickened for nothing. I wouldn't hesitate to go up in an oak, but that was a poplar. The other problem was the angle of the rope. I set it at 45° with the available stumps. Higher, the rope would be stepper and quickly looses a lot of efficiency. I didn't do the actual math on the field, but I feel like falling from a border line situation to an other one.

What I should have done is at least to put my bull rope in a basket configuration on the trunk. That would have reduced the elasticity by half, if I was aware of this particular problem. I knew that I couldn't lift the tree with the comealong, so I was expecting to just hold it as is on its leash and lead it to the lay, following an arc. But it wasn't a steal wire or a dyneema rope, just a polyester double braid and it actually acted like a bungy chord. I asked too much of it.

I climbed the horse chestnut to remove the debris and cut clean all the broken limbs. She should sprout again and reconstitute her crown. The HO weren't too mad at me. I even bet that I was more pissed than them.

Now I have some gear envy again (as if it had stopped at some moment !), like an heavy duty rope and a more serious pulling power (+ the appropriate accessories of course).

Big thing is you lived to fight another day!

Routine day. Temps were reasonable. ~80°, and humidity wasn't bad for MD. I cut some of my honeysuckle when I got home. There's a bunch more left, but I want to fix my lightpost out front before I remove it all. The honeysuckle's kinda hiding it. That stuff's really unruly. I had the intention of trying to keep it, and just keep it trimmed, but that doesn't look like it's gonna work out. The way it grows is just too spiky. You get long branches of irritation, or nothing.

Also puzzling over a couple trees out front the animals planted. Both are under the wires. The pin oak I think will have to go, but I might do some playing with the walnut. See if I can keep it short. They seem very receptive to aggressive cutting. The internet says oaks are too, but a topped pin oak will never look right I don't think. also looked at my locusts a bit. Still not sure how I'll get up the one without spurs. Weighing options... I also want to remove a biggish limb on the cherry. It has bad geometry, and it's blocking light for the black oak.

One thing I noticed that was interesting, was one of my walnuts dropped a significant number of leaves. I'm pretty sure that's the cicada's doing, but not exactly sure how. They seem to love that tree, as well as the ERC next to my drive. I haven't noticed them as thick in my backyard walnuts/ERC.

Family and I went to a campground this weekend. Plenty for the kids to do. Best part is there was no internet or cell service. Reserved the site for a few week ends next year.
Ran estimates yesterday and installed 3 cables in a pin oak. Pruning has to wait till late fall but at least I got it cabled. The old cables had failed and were way to low anyhow. Tree should come down was my recommendation. Then moved logs at home. Trying to catch up on things.
Today was another great crane day. I chased the pill on a good sized pin oak in the morning and then rode up to set my slings for a large spread silver maple in the afternoon. I’m whooped so nothing got done at the house this evening.

Chill day with the kid.