Got to add some rubber cement to my kit. The plugs are “pre” gummied, but a coat of rubber cement lubes the plug for easier insertion, and (IMO) gives more security to the whole deal.

Never heard of that, nice. Learn something everyday

I ought to get a kit...what brand do you guys recommend?

I’ve been plugging tires for 30+ years. Always have a Slime kit with me. I’ve had a few holes big enough they required two plugs, and twice it’s taken three to plug the hole. One of those times took some Slime in addition, and it didn’t hold but a day or so. But it got me home.

This is what I have, Burnham. I’ve had three of them. I keep one in the trunk of the car and one in the Ram. When I’m in Ford, I snag one of the others. 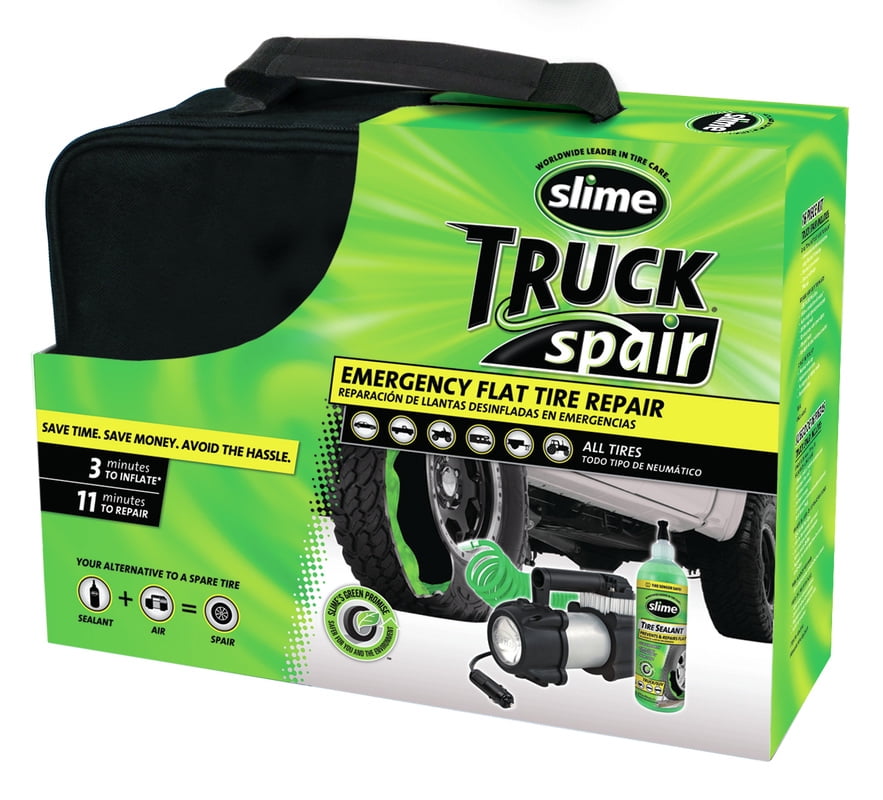 I use Slime currently, but never had any brand fail under reasonable use. I had a piece of rebar go in a tire once, and I put six plugs in it. Got me home, but it had a slow leak.

edit:
This is more or less what I have, but I don't have the rubber cement... 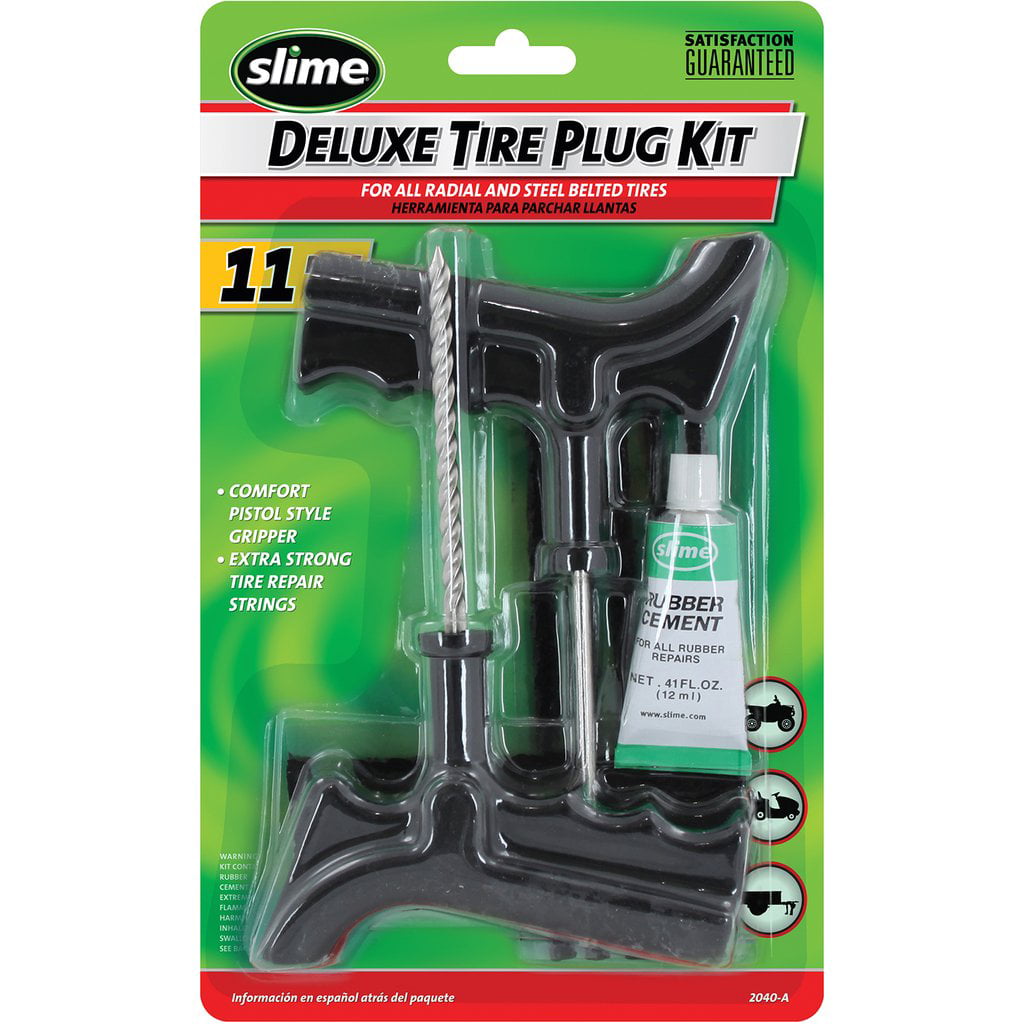 Whatever you get, don't get the kind that isn't a T handle, and the forked plug inserter is MUCH better than the hook style.

Patch plugs are the “proper” way to go, but they require that the tire be dismounted from the wheel to install. Most folks aren’t willing to go to that much trouble. I keep two new trailer tires in hand at all times to prevent being “down” due to a flat. Mounted a new tire on the Accord a while back. Had to use balance beads as I don’t have a balancing machine.

Actually, in regard to Burnham’s query, by “kit”, I mean plug tools plus compressor. Plugging is no good if you can re-inflate!

Burnham said:
I ought to get a kit...what brand do you guys recommend?
Click to expand...

When I was a kid growing up in my dad's service station he always used Safety Seal plugs. He taught me that the smooth sided reamer would separate the steel belts in the tire instead of cutting them. Cutting the belts can create a weak spot. I've used the same brand for 40 years. Many times I've given my kit away to somebody and bought another to replace it. Probably bought 15-20 kits over the years.
Amazon Safety Seal plug kit

I've had bad luck with inflators. I have an old ass WesternAuto(remember them?) high capacity bike pump I use to pump up tires. I use the hoses off dead 12v compressors to keep it going, but I think I'm on my last one now. Kinda sucks pumping up truck tires by hand, but it always works. I'll take reliability over ease when I'm sitting on the side of the road.

another great crane day yesterday. Sorry only pic I got on this phone. Only had one other any how. 127’ of stick at a 90’ radius is pretty flat. We took it Jonny Cash style. One piece at a time😎. It was an ivy covered silver maple abomination. Crane op really had to trust me on diameter of every cut. To quote him: “It just looks like a giant green monster to me!”

Finished up an annoying takedown for the neighbors who moved here from the UK 2 years ago. Stupid excavator for GC who did the knockdown/McMansion rebuild next door killed a stand of Ash trees blocking the view of the power tower behind our street. Amazingly, no EAB damage, so they all died from the root damage the clowny excavator did. Made for some hairy moments, like when one of the tops that I had to aim for the corner of the property detached early in the back cut due to unseen decay, sending it toward the house. It would have cleared it, if the top half (~20 ft.) didn't snap off mid fall and land on the deck instead of swinging down the side of the tree. Luckily only smashed a solar railing post top on the deck, $25 at Homerland. 5 trees, 10 stems to deal with, ranging from 35 ft. - 80 ft. tall in tight quarters in back yard. New kid handled the porty well, and handles a saw pretty good too. See update in "What are You Drinking Tonight".

SkwerI said:
When I was a kid growing up in my dad's service station he always used Safety Seal plugs. He taught me that the smooth sided reamer would separate the steel belts in the tire instead of cutting them. Cutting the belts can create a weak spot. I've used the same brand for 40 years. Many times I've given my kit away to somebody and bought another to replace it. Probably bought 15-20 kits over the years.
Amazon Safety Seal plug kit
Click to expand...

That's good enough for me, Brian. Thanks.

That kit would last me the rest of my life...plus some

When I was working in the woods for the Forest Service, I probably averaged 3 or 4 flats a year. Whereas on my personal vehicles I doubt I've had more than 3 or 4 flats in the last 30 years. Better roads off the job, I reckon

Great thread to catch up on...

I contract climbed yesterday... made my 5 Bill's and hit the road at 2pm.

That looks like a horseshoe nail, Scott.
Any Amish in your area?

I have been splitting wood all week.
A buddy came by today to help, and I had high hopes for finishing today.
Then 1 hour ago, with only 2 cubic meters left, the splitter died.
Needs a new valve for the back and forth motion is my guess.
At least it waited till I was almost done.

Now I don't have to think about firewood for the next 4 years.

Deva, what kind of funky tree is/was that?

BeerGeek said:
Deva, what kind of funky tree is/was that?
Click to expand...

To hazard a guess. I would suggest Ficus of some sort.

It does look like our Beeches here as well though.

Needlessly long day. I just got home. Did a few hours of paperwork, then was just playing on the computer when the engineer told me he couldn't access Mega. After playing with it a minute, I concluded that it finally doesn't support xp, or the old ass firefox anymore. Decided a virtual machine would be the way to go, and downloaded a bunch of light distros to try out, Settled on BunsenLabs, and did a proof of concept install on the boss' computer that has similar specs. Runs like shit, but it runs.

Now I have to get a ssd for the engineer's computer, and do the same on his box. Dunno why it runs so shittily. I had a vm on my old machine that was exactly the same as the boss', aside from running xubuntu, and it ran a vm great. I guess it's just windows. Shocker... I'll see what I can do to boost performance. It would be useful aside from mega having updated computers, if nothing else, for security. We're stuck on xp unless the boss wants to spring for new autocad licenses($$$$). Someone stole the boxes with the keys, so when the hardware dies, autocad dies. Windows throws a shitfit if you just swap drives to new hardware. I think it's technically doable, but also technically challenging, and technically "illegal". Otherwise, I'd install gnu/linux on the machines, and turn the current installs into virtual machines. That would be ideal.

Linux for the win

Really nice day. Few punch list items for work, few broken lilac stems, planted a small sugar maple. Went into town to cash a check, and they were having the first art walk since The virus set in.

Wandered around Maine St. looking at paintings, ran into some friends and grabbed a beer and some dinner. Really a delight to see people out and about again

Also, it was 60° all day, you gotta find your way up here John

If you got started at

stig said:
That looks like a horseshoe nail, Scott.
Any Amish in your area?
Click to expand...

Haha, not that I’m aware of! That nail’s way bigger than a horse shoe nail. Close to 2-1/2” long. We always called them cut nails. It what we used to use to nail bottom plates down on slabs when framing. (Before everyone started using powder-actuated fasteners or screws.)

Took the day off to receive a pallet of clays for the trap range. Met my fellows for breakfast and then the three of us went over to the hall and worked on the swamp coolers to get them 100% for summer rentals, our MPFGA 90th anniversary that was held off for a year and our monthly dinners and board meetings. Shipment never arrived and the warehouse could not confirm or deny they went out for delivery. Oh well. Nice day over all.

Happy Saturday!
That tree is a Privet. Chinese I believe... undulatum

We always called them cut nails. Some people like setting them for benchmarks in power poles, but I'm not a fan. Poles and nails can invisibly move, and cause problems.

Tremont Nail is the oldest manufacturer of nails in the U.S., producing the most extensive line of steel cut restoration nails at its historic mill in Wareham, Massachusetts for over 180 years. Tremont offers 18 historic patterns of cut nails for restoration, renovation and authentication...
www.tremontnail.com

Beautiful day for a trap shoot