I'm aware of the technique, but unsure when it would be good to use it. I seem to remember it was kinda popular for palms.

Sorry for the laugh. A bit before you joined, ex member.

That young fellow was pretty good on the saw. Though I'm not so sure that tree needed all that cutting just to get it on the ground safely. For demo purposes only, I'm guessing.

That compilation...what I saw is the guy needs to learn to use some stump shot to keep the back slide from happening. And he needs to learn to GTF out of the kill zone..idjit just standing there watching at 1:20.

The original vid on palm trees for this method is this one (12 yrs old):


And lo and behold, our old friend August just recently did a vid on it as well:

Still not sure I get it. Seems like you'd need some *very* particular circumstances to make all that cutting worth the effort. You get to make wtf stumps if you leave them, and the right person to recognize a wtf stump and wtf over it is kinda amusing, but you miss all that.

pantheraba said:
That compilation...what I saw is the guy needs to learn to use some stump shot to keep the back slide from happening. And he needs to learn to GTF out of the kill zone..idjit just standing there watching at 1:20.
Click to expand...

When trees have to roll of other trees in order to get down, stumpshot will sometimes cause a bad tear out in the bottom of the log.
I don't use it either in those cases, might even set my backcut a little lower that the face, to be absolutely sure it can roll free. 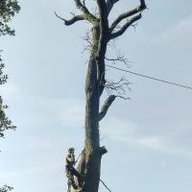 Location
the end of the longest line

lxskllr said:
Still not sure I get it. Seems like you'd need some *very* particular circumstances to make all that cutting worth the effort.
Click to expand...

Being paid hourly I imagine would do it
S

stig said:
When trees have to roll of other trees in order to get down, stumpshot will sometimes cause a bad tear out in the bottom of the log.
I don't use it either in those cases, might even set my backcut a little lower that the face, to be absolutely sure it can roll free.
Click to expand...

I wonder how dangerous this would get with a big wide hardwood?
Maybe something old with a fairly wide canopy?
Not me no thanks.

One thing I'll do, is set stumpshot in the side it has to roll towards, then I get the benefit of both the low backcut and the stumpshot.
Obviously one should get the hell out of Dodge when using no stumpshot.

Something old with a big canopy is too heavy to roll off another tree, without causing a lot of breakage, which is frowned upon.

Good input, Stig. Thanks for the feedback. A further aspect to consider I had not been aware of.

I've used the T and G a couple times to prevent smashing things immediately in front of the stump.

As I see it, the goal is to keep in control a poor hinging wood (or at least not good enough for the need), like the tree has to follow the intended lay until the ground instead of breaking loose after just a 10-20° move.
But I fear the leverage could split the stump or break the tongue with a substential sideleaner /side weight.

I didn't thought of it for protecting things underneath. That could be interesting. A little training before seems advisable though.
A good exercise for the borecutting precision !
Last edited: Feb 22, 2021

More trouble than it's worth, sometimes, but it can keep the butt off the ground for limbing. You can roll an Arbor Trolley or other cart beneath, and carefully release the trunk onto the trolley. A little heavy lifting saved.

Can keep a side-hill felled log in place for various reasons. Can be used in conjunction with rigging so the wood takes the hit, not a rope.
M

pantheraba said:
That compilation...what I saw is the guy needs to learn to use some stump shot to keep the back slide from happening. And he needs to learn to GTF out of the kill zone..idjit just standing there watching at 1:20.
Click to expand...

I didn't really watch closely, but I qued the video to a cut that looked like he intended for the but to slide back off the trunk. he cut through the hinge completely on one side to allow the top to pivot then slide backwards. it looks to me like that was all in the script.

That was all business as usual for trees that size in that setting.
Not much room to put them down and not much crown weight to pull them trough.
In that case you want as little hinge wood as possible.
He also followed the faller's 1st rule: if at all possible, fell them towards the lean.
That way you can set a tree that size on two stamp size pieces of hinge wood, just enough to get it stated towards the lay when you trip it.
Then it is free to roll and slide left and right as necessary and it get a good initial speed.
Only thing that irritated me, was he didn't clean up his escape route.
If you know you have to get away fast, clear your route.
My apprentices know, when I start cutting saplings down and removing branches from the ground, that some heavy shit is about to go down.

Of course, if everything goes wrong, you may have to run another way entirely.

Burnham once posted a video of him taking out a huge, rotten Doug fir.
Had a nice escape route planned out and cleanet up.
Then as the tree goes, the top 3rd or so broke clean off and came backwards, right at the eascape route.
Burnham, being an experienced faller, had an eye up, of course and changed course, running downhill like a rabbit, gimpy hip and all.
The mushbag of a top landed right where he would have been, if he'd followed his original plan, exploding in a red cloud of dust.

One of the best videos I've seen.

Some of you may remember this one:
One top broke off and came back. We were locked in by a ditch on one side and a felled tree on the other,
so could only escape directly backwards, which is where it was going.
That was a "Run, Forest, run!!!!! moment.

That one had me shaking Stig, afterward as the adrenaline seeped away. It could easily have been a killer.
Last edited: Feb 23, 2021 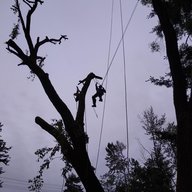 Where do I find said video? BTW that t&g cut may be good for palms with pulp hearts as the hinge is only in the outermost of the trunk.

Ty, I think that post/thread is gone with the wind in one of Butch's forum revisions. I've searched for it in vain before, because I don't have a copy of the video. I might have a few still pics of the aftermath, would have to look, but the vid was taken by another USFS employee and my copy went away with my agency computer access when I retired.

If anyone knows differently, I'd welcome seeing it resurface.

If you are asking about the t&g it's supposed to prevent twist and roll 🤷‍♂️
You must log in or register to reply here.
Share:
Facebook Email Link