Mick! said:
I don’t suppose he’s refusing to fix it, just managing it till he gets the opportunity/time to sort it.
Click to expand...

That's called, "keeping an eye on it" and works for anything that you're not ready to deal with just yet. I went thru 3 litres of power steering fluid when I was keeping an eye on a pressure hose leak. The last litre is still spread over the floor of my garage.

Mellow said:
Why do some folks refuse to fix oil leaks? I've seen this so many times. Sorry, pet peeve of mine. Carry on...
Click to expand...

Actually a bunch of places make you do the little kiddie pool under the crane anymore, takes a minute but can prevent a very large spill. So if you aren't leaking, you still have it there in case you do. My chipper leaks a bit of oil, 30 plus year old engine that has a crankcase breather tube, good luck making one of them leakproof. The other leaks you take notice of them when you see them, and fix them the next oil change.

Plenty of kiddie pools if you want to cover all the hydraulic circuitry area of a crane!
Once, the filter on the return line of my small chipper got clogged. The pressure increased and busted/pushed the cartridge's gasket. Luckily I was on the dirt and not on the driveway.

There's a saying: " hydraulic always leaks... or will"

Deformed Pin Oak is just to the left of my climbing line. All bent over from being trapped between Maple and Ash behind it. Yellow jackets came out from base of Ash tree:

Where we left the pig by EOD. More fun tomorrow:

That is one hell of a lotta tree to get gone. And that base looks fug-ugly. Well done.

Started the day with a consult/ sale for existing customers, new house.

Back to a nearby job today.
Wraptor ride. 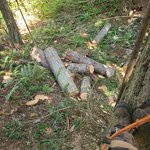 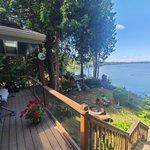 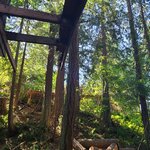 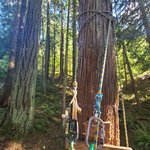 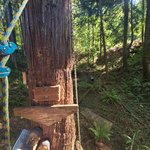 Chunked the lower spar with a 28" bar/ chain that, I found too late, would cut square-on crosscut fine, but on the angle cuts were jamming up.

I decided to cut 4-5 kerfs right next to each other, then the wood bits remaining between were broken out, forming a full gap face. Small snipe, full dutchman, no hinge, no wedge or pull line.

6" lags turned out with a ratchet with a bit of grunt... no breaker bar or cheater pipe.

Here are the promised pictures of the rather unusual job, we did in the castle park, after logging got shut down.
An old yew alley that had since it was planted, simply refused to do the " pillar" thing.
So they have been repeatedly tied together over the last century.
A heavy snowfall knocked them askew 10 years ago.

We promised to see what we could do.

Worst thing was all the old baling and fencing wire in them.
Hard to see and hard on the saws.

Both we and the owners were satisfied with the way it turned out.

That Volvo loader is almost as old as I, and about as grumpy.

I was happy about not going back to the woods.
My knee is still swollen and hurting a LOT.

That inner thigh is a prime target for our bando shin kicks...you took a big blow for sure. Ideally, it's just bruising and no disruption of tendons/ligaments.

After 15 years of full contact karate, it is not the first time my leg has looked like that.
But I wasn't 64 years old the other times.
I consider myself lucky that I got off without major injury.
A foot thick branch that snaps 6 feet sideways, hits HARD.
It really knocked me ass over teakettle.

Still can't figure out how it got the better of me, I mean it is hardly my first day at felling Beech.

Stig, you are 64 years old, this is the latest in a series of avoidable incidents, it’s time to listen to the fates.

As in retire with no pension plan and live the rest of my life as dirt poor.

Sounds like a plan.
Last edited: Saturday at 2:41 PM

Sell the farm and move to a mobile home in the suburbs of Copenhagen?

If that is the choice, I'd rather take my chances with logging.

"Suburbs of Copenhagen" how the hell did you get the idea that I speak Arabic?

Just messing with you.

Pacing is something I'm working on.

And here I thought you Danes had great birth to death benefits. Darn, this makes those tax rates look a bit more onerous than I'd assumed.

Once all the purple and yellow goes away with sexy 64yo legs like that Stig you could sell yourself in Amsterdam.

First solo work in a while, silver maple with a big defect over a daycare play area. Sure, open up the fence and stuff all the debris in the woods! I love treework in Maine.

Seriously misremembered the size, probably about twice the DBH that I thought it was. Don't you hate it when they grow overnight like that?

If you don't touch the tree, it's bigger than you think.

Helps me to underestimate less.