Wow! Intricate, technical, methodical, she is awesome. It looks like she's totally getting wiped out yet she's in control. Amazing skill. Way beyond mine.

If you want to see something truly weird, click on the first vid in this article....5 vs 5 polish mma

MMA Fighting’s Alexander K. Lee takes a look back at recent overlooked battles, including a truly mad 5-on-5 fight in Poland, some of the nastiest knee knockouts and falls you’ll ever see, fights ending in less than 30 seconds, and much more.

Pretty f'd up. Folks must really be bored with their life.

Yes there are quite a few knobs out there. I saw a video a few years ago, which was basically street fighting in an estate replicated in MMA form.

Suplexing people off 3 foot walls. Surprised there were no broken necks. I found this clip but it is tame on comparison but you get the gist of it.

That was nuts. More interesting imo than 10 guys in an octagon just beating each other.

Have you seen the shit where they wear suites of armour and have dulled weapons?

I mean, that's a kinda redneck version of actual middle age sports, i can dig it. I just checked, apparently full contract jousting is still a thing too, which is super cool imo

Today was the Sande International BJJ open. He put his name down as the instructors at the club suggested he do it for a bit of an insight into competetions and experience. So he entered the white belt 55kg category. They ended up moving some things around and in the end there was 4 boys about the same age and weight and experience within a couple of junior belts.

Haakon stepped up to them at for his first match in BJJ ever. Fight ended after 4 minute at 0-0, Haakon got the ref decision as he was more active going for submissions.

Second fight, Haakon was up by 11-0 after about 3 minutes then he got the opponent in an Americana and the ref stopped the fight.

Third fight, Haakon was pretty technical and was up 11-0. He had full mount and was applying pressure. He stuffed the other kids arm across his face and applied body pressure. Tightening it all the way. The ref stopped the fight. Win by choke to Haakon. The other kid freaked out a bit and was saying why the ‘f’ didnt you stop and kind of lashed out at Haakon. Haakon did nothing wrong and played till the ref stopped it. The other kid couldn’t tap as his arms were tied up and couldn’t verbally tap as he a mouthful of his own Gi.

Proud dad moment and Haakon was chuffed stiff. Especially the kudos he was getting from the coaches and our friends from Frontline (who he fights Thai Boxing for ) especially the 4th degree BlackBelt from Rio who is the Professor congratulating him and giving him props.

Most people get nervous and screw up there first big tournament. Haakon was like, ‘I am not tired at all, can I go again in a higher weight group?’

Choking him with his own arm and his own ghi is a nice touch. Your boy is doing well.

How much bjj has he done?

I'm guessing he's more of a striker than grappler but maybe it's too early to say for sure?

cory said:
How much bjj has he done?

I'm guessing he's more of a striker than grappler but maybe it's too early to say for sure?
Click to expand...

He started in February this year. But lost a few weeks/months as we were on holiday in the summer and then had to go to the Uk. He only really started as the lockdown restriction were preventing him training in Muay Thai, Oslo was different to Nesodden where I live. He did a bit at RGA before lockdown. So he went down to the local club but at first they didn’t want him to train as he was under 15. I just said he needs to do something, don’t worry he isn’t gonna Sue you if he accidentally gets a knee to the nose. I said He is used to hard competition and I will sign a waiver if need be.

They let him train with the adults after a session.

In reality he has trained about 6 months. Mostly at Nesodden Grappling (local club) but then recently also at Roger Gracie Academy Oslo plus then doing 1.5 hours Muay Thai straight after. Hence his fitness is on point.
Last edited: Dec 4, 2021

Try not to laugh

The winner wakes up first?

Ha, ya gotta love this. Typical father vs son stuff. In case you don't know, the dad here is Michael Bisping former ufc 185lb champ and now a ufc commentator. Even a ufc champ ends up calling for mercy from his young, strong son Lol! 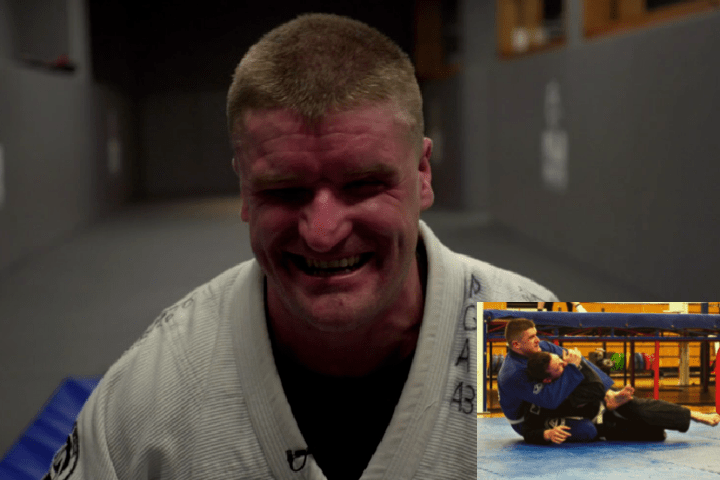 Robert Long, a former soldier of the British Army, was blinded by an IED explosion in Afghanistan. Today, he's a BJJ purple belt and a BJJ champion.