Me too - I really like my K&H at the moment - I am felling a lot of smaller trees and often hit the wedge so it being quite soft is a bonus
Last edited: Jan 12, 2021

Burnham said:
True, but those can still spit out.
Click to expand...

Why would you Burnham ? You have not spent a life alternating between burger vans & cutting firewood 😂 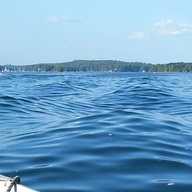 Never used rifled wedges, why do they suck?

The rifling gets mashed up very easily and even when they are new they barely fit within the saw kerf. God forbid if you try to mix one with a standard wedge...

I'm sure if they were "good" the other wedge manufacturers would have copied them in some fashion.

Maybe a wavy surface longitudinally would be sturdier, even with only one wedge alone or mixed with standards. That should gives a loose fit when they are mashed up, but still allows a good guidance under load.

I have a pair of Mr. Montgomerys’ wedges and they are a fantastic addition to any fallers trickbag! In a situation where 2 wedges are needed this product is FAR superior to trying to “stack” single wedges on top of each other and much safer to boot

stikine said:
The rifling gets mashed up very easily and even when they are new they barely fit within the saw kerf. God forbid if you try to mix one with a standard wedge...

I'm sure if they were "good" the other wedge manufacturers would have copied them in some fashion.
Click to expand...

They do work well is small hardwood trees where you need to set a wedge parallel to the hinge. But other than that they are wedge shaped. I have one that has cracked at the rifle. I've been rocking hardheads the past year and I'm not going back.

I’ve got a 3 yr old pair of hardheads still kicking. Tips have been tickled by the saw a few times but damn tough wedges and no breaking in freezing temps. Out of my pile in the truck, I grab those or barbed Wells most often. K+H are superior quality to Wells but spit out more often, Hardheads are maul-able.

The Wells I've had are more like trying to use a stick of butter as a wedge.

I have found that if they are backing out single, not stacked, that adding more wedges beside is very helpful. Puts less pressure on a single wedge. Also allows for progression better.

John Ciro sez, "If you're using wedges you're doing it all wrong." My advise is, "If you're working beside John Ciro always maintain a minimum safe working distance of at least 300 feet. On steep ground, on the downhill side of Ciro, it is wiser to triple that safety margin or abandon altogether.

Lol, I love your John Ciro stories. Bizarre that I never met the man yet I feel like I knew him. In a nutshell, fair to say he was a bit of a mad man, swore more and better than any 10 sailors, and knew how to get sh*t done??

Hello, @cory! Thanks for asking. A combination of factors were keeping me away from the forums.

I had a very old handheld computer that I used to use as my primary means of accessing the forums. It was more portable, convenient and faster to turn on than a laptop, allowing me to read and contribute while out getting a meal, for instance. Over time, the software of the internet changed, eventually making it impossible for me to access the forums on that device. I did not often want to take the time to sit in one place using my laptop, so my participation dropped off. Just recently a couple of different people I know each gave me a different phone they were no longer using due to the fact that they had upgraded their phone to newer technology. Their old phones were much newer and more powerful than my much older device, and they are both capable of being used in a stand alone fashion, without having to activate them on a mobile phone network. So I’ve been familiarizing myself with both devices of late. Both are compatible with the recently changed web site software, so now I again have access like I used to.

The other thing keeping me away is the fact that I have a family member who has been health compromised, and it has been taking most of my time trying to assist them in any way that I’m able. As a side effect of that, my opportunities to climb have been greatly reduced. Being actively involved in something causes one to need to seek answers to questions about it. Not climbing as often reduced my need for those answers, so that also played a part in my absence.

Sorry to be so long winded, but that is the basic explanation for my too-long lack of participation in the tree forums. Thanks again for asking, Cory. Stay well. Tim.
You must log in or register to reply here.
Share:
Facebook Email Link