The New Offical Mutts of the House thread 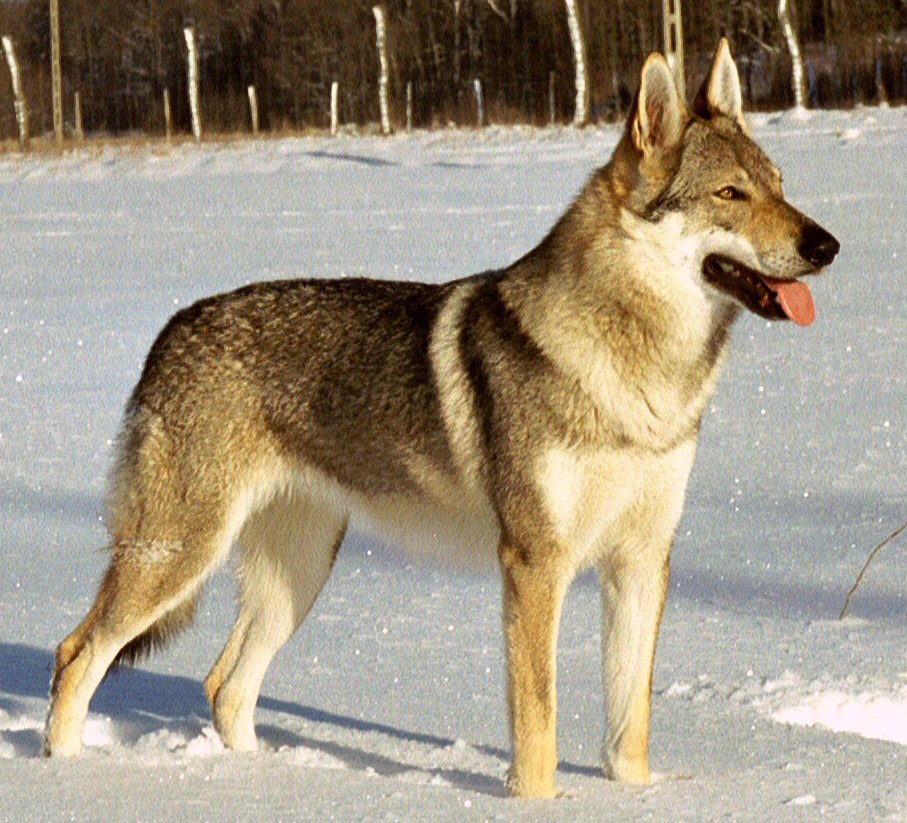 It is a cross between Wolf and German shepherd that was made for military and police use.
The breed was very strictly regulated and any showing physical or mental defects were culled.
I managed to get in contact with Karel Hartl, the colonel who started the breed ( No mean feat, this was before the internet) and talked him into selling me a pup.
His wife had to translate, since he didn't speak any foreign language, she had some German.

Just before I was to go down and pick it up, a postman got attacked by a wolf hybrid and the media went crazy ( The postman was later interviewed and he didn't get what it was all about, he had his pants torn, but like he said, had been bitten worse by a Golden Retriever).

There was a lot of talk about outlawing wolf hybrids, so I called Hartl and told him I didn't want to risk training a dog and eventually have the cops show up to take him.
Take would be a case of " out of my cold dead fingers".
Last edited: Feb 8, 2021

A beautiful dog. It would be so rewarding to establish a deep link with him, but so much skill and work are needed.

Thanks for the link, Stig.

See, the reason I wanted one was:
We have an organisation of people with specially trained dogs, who volunteer to go out and track, when the brave hunters have wounded an animal.
Their dogs have to pass a test in order to be certified.
I spent years working for them as a track layer. Voluntarily.
Means you go trough the woods with a pair of deer legs, a bottle of deer blood and a small recorder.
You lay a trail and record the specifics of where it is: left of the shaggy doug fir, right of the mossy rock etc.
Then at the test, you walk next to the judge and keep him up on how well the dog is sticking to the trail (is that the right word?)
If the dog goes more than 50 meters off, flunked.
You have to be seriously wood savvy to do that job, because you lay out 20-30 trails and have to remember them all, next day.

So after doing it for years, I found out that one of my dogs, mixed breed as usual, had the makings of a World class tracker.
So I trained him for that , but when I wanted to enter him, I was told that only purebred dogs could qualify.

As you can imagine, that pissed me off no end, I ended up calling them a bunch of friggin' Nazis and left.

There is a Danish woman, Britta Rothausen, who does wolf research.
She had a wonderful, huge, male wolf, Samson.
Just to prove it could be done, she took both the K9 and Sweiss hund ( Blood trail) teasts with him and passed both with flying colors.
The judge I usually worked with, had been the judge when she did the Sweiss hund test.
He said, that he'd never seen anything like it.
That Wolf followed the trail like it was a groove and he had a wheel on his nose.

Turns out that Wolves have a WAY better sense of smell than dogs.

So I figured, I'd get a wolf hybrid and show all those fat hunters and their stupid hunting dogs how to track.
Since the czeck wolfdog is a registered breed, they would have to accept it.

Felt sorry for the Amazon deliver driver tonite....dropped off packages at 7:00 pm, inside door was open, Marlin laying there, looking thru the storm door for rabbits.

The shit hit the fan when Marl saw the packages hit the deck. He has this blood curling high pitched bark and he went off!

Looked out to see the driver wasting no time in getting back to the truck.

Stig you guys must have more hours in your days over there.

Nope, that was before I went gypo.
I was working for the State forest back then, way more free time.

Thais is just soooo bored with me just gimping around the house.
The crew was taking an ash tree down 2 miles from my place, so I asked Richard to drop off his dogs.

Playing around with his best buddies in the snow and then enjoying a bone together sure perked Thais up.

A friend of mine butchered a Hereford last week, he brought me enough bones to fill a freezer.

My thugs doing their thing

What does he have in his mouth?

Yes OB (a bitch) has an obsession with dispatching possum . Luckily for me I have been able to deter her from skunk. Dude (the male) still hates skunk and is often locked in the garage for days as a result..... Whilst mountain biking we travel many miles and cross many paths
G

Thanks.
That picture just makes me want to ruffle his ears a bit.

Hell of a dog.

Thanks. He looks gruff but he’s all puppy.

Damn good looking dog there. My Dad had an Alsatian (German Shepard) that was a huge ,intimidating beast. He cost my Dad a fortune, still can't believe he paid for it as he was a cheap SOB . 2 hip replacements by 3 years old....... I stick to mutts as they've never cost me a dime.

Up date on Kitty Puppy the chihuahua. We had to put her down tonight. Something happened to her in our daughters room. Csnt tell if the larger dog sat on her, or they had an altercation. Eye popped out.
Over 2000.00 to do the removal and such. She is old. Blind. Might have heart issues. So we say goodbye tonight. Lilly was a mess when we left for the animal ER. Not a good night or morning Im afraid.

Condolences to Lily and everyone.

Thank you Sean. She did some baking last night to help her spirits some. Life on our little phunny pharm changes rapidly. A new dresser to stock and decorate. A new bunny to feed. Some chicks and quail hatching. Something always need warm attention and that helps.
I went out on my tractor and worked on some fence before feeding the family. Gunner came over to check on my mood.

Oh, what a beauty!

sorry for Lilys loss. Lossing a dog always sucks especially for the kids
You must log in or register to reply here.
Share:
Facebook Email Link