If I had to suggest just one, it’d be the Hitchhiker, it does it all, tends nicely (even better w a micro pulley), SRT, DdRT, lanyard, or whatever. I think the HH2 is about the least expensive of them all too, besides homemade.

Even if you did a simple split tail setup you would be light years ahead of no climb line. A heavier snap actually throws wonderfully up ahead of you, just be careful when it comes down towards your head! Clipping a throw weight is better

I haven't done much treework lately....lots of other stuff (x-ray work) last several, several months and have not pursued trees. A bit of a slower time now and Alex and I are planning some jobs.

I haven't spur climbed in probably 3-4 months...I did tonight. Last time I did spur work in the dark was 2005 at Katrina....working in the cooler night sometimes was better than the hot days. We are supposed to have 3 straight days of rain here so I got the APTA out about 30 minutes before dark and tried to set a high crotch throw line...I plan to hang a block about 60 feet up a pine and use it as a gin pole for some big leads that need to come out of an oak near my house. That pine ate TWO throw balls. I wanted to have that belay crotch ready for Thursday when the rain is supposed to break. The rain starts later tonight. I just said, "frig it", suited up, put a headlight on my helmet and started up the pine at 7:37 (I remember looking at the phone.) First limb was at about 40 feet so I had a good bole to get my treelegs back again. Did that first 40 feet with no light, just by feel. I did use the light when it was time to pass the first blocking limb. I used my climb line for the bypass safety (old days we used to just hold on with one hand, pass the lanyard around the tree, hook back up and climb on...Butch will remember those (stupid) days. So I got to use the lanyard and climbing line to make my way thru the tree to rescue those stupid throw balls.

I made it a point to be real deliberate when re-clipping the lanyard...using sound of the snap and sight of the closed snap to be sure it was really secured. It was nice being back in a decent sized tree again...trees are pretty interesting in the dark, too. This particular pine will be one of the removals Alex and I do in the next couple months...it has some trunk lean towards the house and the top is favoring the house side, too. Probably an 80-90 foot pine and about 30 feet from the house...bad combination of numbers.

Simple , one off my left Dee and one off my right ... both have a Gibbs. Safe , easy , not bulky or expensive.

I still love the Gibbs for pitchy sappy stuff, there’s not much else that performs as well as a rope grab if the device or flip line get sticky.
I like a hitch, or Trango Cinch for other stuff, can pay out slack while it’s loaded.

Two other advantages of double safeties is lateral movement in the tree with a climb line , usually easier to advance safeties than pulling the whole tail through ... also when up in thin limber tops I'll often set one safety negative and the other positive ...

What makes the Gibbs better than other grabs? Looking at pics, it has some extra stuff on the outside of the housing, but I'm guess the internals are typical?

lxskllr said:
What makes the Gibbs better than other grabs? Looking at pics, it has some extra stuff on the outside of the housing, but I'm guess the internals are typical?
Click to expand...

I have a Gibbs or 2 and a couple BuckGrabs with the eye set at 90 degrees instead of inline with the body of the device. They’re pretty much the same device. ISC, Petzl, Rock Exotica, etc all make a very similar rope grab.
I think Gibbs did it first, Jerry recommended them in The Fundamentals of General Tree Work, really bomber tool that will last a very long time. I’d recommend going with a reputable brand anyways, not Chinese. Always a hard “no” from me regarding cheap gear for life support.

Gotcha. I have a Climb Right. Looks like the rest of them more or less, but they're cheap. I guess that's why they put it in the spur climb kit :^D It has the standard eye. Been thinking about trying a prusik instead of the grab, but I should probably get a pulley. Maybe on my next order whenever that is.

Looks like a nice carving project from a piece of hardwood, by the fire, on a winter evening.

Climb right is decent, made in Italy i think. I use one of their rope grabs i think.... 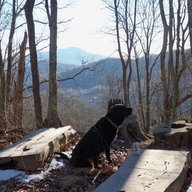 Petzl micro grab is the best rope grab I've used. Compact, simple, and relatively easy to release under load for a rope grab. Seems pretty durable too, for a petzl product.

I usually don't do two fliplines and just run a climbline on my lower D's for my secondary. Doesn't flip great by any means but it's a way to the ground of need be.
Last edited: Tuesday at 5:47 AM

Petzl works good, had the Macro.
Gibbs is just plain good. And you can get spare parts. Petzl I replaced the cable spring a couple times and then weed whacked line. Gibbs is an actual spring. 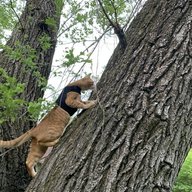 lxskllr said:
Thinking back, I wonder if I chose the wrong career. As a kid, I used to occasionally see guys in trees, and thought it was really cool. I was also big into climbing trees for fun(I guess most boys were. Are they still??). Somehow, I guess I forgot about it, and didn't consider checking it out when I got into working. I either missed out on the best career ever, or would have missed having a fun fresh hobby in my later years(burned out from doing it for money) :shrugs: You don't get any do-overs, so I'll just play the cards I have :^)
Click to expand...

I feel like you just wrote my life story! I want to keep a positive attitude like you. Fortunately I also love my "wrong" job. And I get to do a little rigging occasionally.

I use my climbing line with a pigtail for friction hitch. Makes for a real long lanyard and just as easy to advance as a regular one. As another person said, it gives that quick trip to ground as an option if needed.
You must log in or register to reply here.
Share:
Facebook Email Link