I got the video....no sound but a good montage. Great tribute, Kenny. Thanks for the history. Butch wasn't afraid of any tree or the internet.

When I first dealt with him at Treebuzz I considered him a Master treeman. I couldn't believe it when he whispered me to his new TreeHouse site....no way I felt competent enough to hang with him and his kind. But he was genteel and caring. Gruff and sincere. No mercy if you screwed up but instuctive always. He was an amazing fellow. 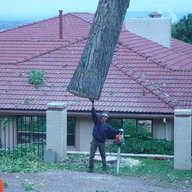 Oh man. This is hard news. I haven't been on here in awhile and thought I would hop on and see whats up. I was just telling my girlfriend what a hoot Butch was and how he called me one time about 14 years ago out of the blue just wanting to know what it was like doing tree work in Colorado. (It was late and he was a wee bit faded) Damn, I cant believe the old guy is gone. If there is a Treemans Valhalla, and I hope there is, MasterBlaster is there feasting and partying all night and slaying the giants all day.

Really like the MB pic at top of pages, the confidence and strength it takes to place a saw that size, while tied in especially; along with the careful focus to do so correctly.
.
i also remember other places even making fun of showing food on their sites, hence the kitchen section here;
that served for something else for them to point at as well.

.
i think this is from AS banning, before the mass exodus , for AS did have it's day in the sun; taht is where i first met Butch!
But much pushing and shoving thru the ranks, and site owner saying exclusively owned all pix, content etc.
i don't think any had more posts than him, but then we all know what he had to say about that..
.
In the end, he used the pic at top of all our pages for his signature icon, years later they put 'TreeHouse Elder' instead of banned.
Last edited: Aug 30, 2020

I was thinking about MB while hurricane Laura passed over Alexandria. He did not like the prospects of tornadoes at all.

Yeah...
I like that his picture is still at the top of the forum...every now and then it reminds me to be nice when posting...or at least, not rude. One can post one's opinion without resorting to rudeness

Butch is in our hearts and minds Jim. And now he is Tree Man to the gods.

Just wondering where he ended up.

Yep.
Was wondering if he ended up in a graveyard somewhere.

Jim, I do not believe so, I believe he was cremated. Perhaps Doc would know if his ashes were scattered somewhere.

He was cremated and joined with his mother as best I know.

I often wonder what Butch would say about current events were he still among us ... I’m sure he would find the right words

Crickey!
Would be my guess.

lumberjack said:
He was cremated and joined with his mother as best I know.
Click to expand...

“I often wonder what Butch would say about current events”

I joined here a bit ago when invited by another member. Butch welcomed me in intros right out of the gate.
I never spent much time here. From all the posts, it seems I have missed knowing a remarkable man and then some.

Butch was a good ol' Boy. Old school tree tramp, and nothing wrong with that in my book. I long admired his staunch attitiude to sticking to the basics. He made himself a comfortable life style there in Alexandria. Nothing fancy. like the Duke.

I miss the humor and laughs. Sometimes crude humor but very often some witty stuff. I don’t “laugh out loud” as often here anymore.